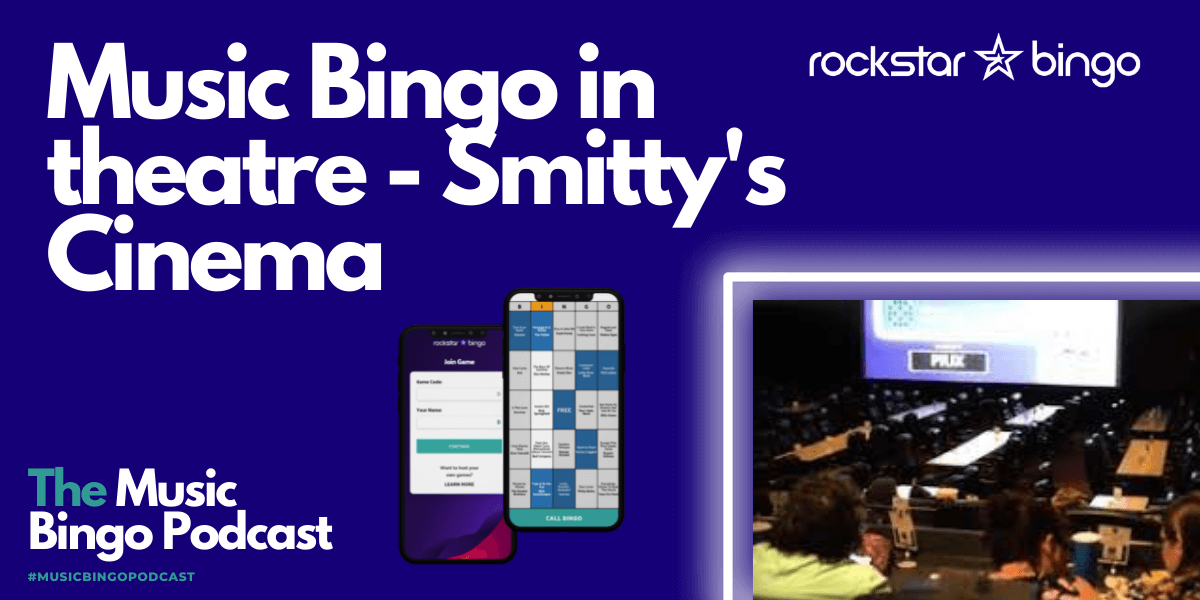 Join us as we discuss hosting, future features, and practical ideas you can use to be a successful music bingo host!

You’ve taken the movie theatre format, and added music bingo in theatres. How is it working?

George: Great! We’ve done one screen for music bingo, in our auditorium, it fits about 150 people. So far, we’ve done three or four nights, and we’re trying to host music bingo twice a month. We hope music bingo in theatres will grow by next summer. It would be great to get close to 100 people in a theatre.

We get over 50% as repeat customers and a couple of groups are new music bingo players. Smitty’s Cinema has free entry for the Rockstar Bingo night. Most of our profits come from the food and drink we serve throughout. It is great for upselling products and introducing new customers with music bingo.

George: We haven’t incorporated real theming just yet. But that is something we can look into in the future to entice more customers to come out. A movie music bingo night would be great fun.

Sean: Yeah, people love to dress up; Halloween is coming – how about Halloween music  bingo? I’ve seen similar things with the Rocky Horror Show. There is a theatre called the Roxy, and they do their events twice a year. People come dressed up in their favorite characters, and they all sing and dance along in their seats.

George: That’s a great idea. I think we can have a little costume party for Halloween-themed Rockstar Music Bingo. I will definitely look at a Halloween Music Bingo playlist. Rocky Horror Picture Show is something that we have done. We provide props, let the customers in, and allow them to do anything they want without damaging the screen or the theatre itself. We have a lot of opportunities to grow in this. It’s just getting the ideas out and executing them.

How is the theatre landscape? It’s changing quite a bit. It’s time to get creative right.

George: We’ve been open for about 15 months since the initial lockdown. We were able to reopen four out of the five locations and recoup most of our staff at Smitty’s Cinema. However, when we reopened back in June last year, there were no movies coming out, and it was hard to play some of the movies from big companies like Disney. Luckily, we were able to get a lot of classics and remastered copies. We sold out discounted tickets and served food and drinks, and it worked out pretty well for us.

We started to bring in money during the offseason through private events where we could bring in an Xbox or a PlayStation. Hosting private events at Smitty’s Cinema with Xbox parties or Playstation is great fun. People came with families and rented out a whole theatre for a three-hour window. This meant they didn’t have to mingle with other customers or social distance. This helped us through, but now we’re back up, hoping that the movies that come up don’t get released to streaming.

So, you guys get movies before you’re allowed to play them. Do you get to watch new movies early?

George: It’s all digital, and the keys are released at a certain time, and as soon as you have that key, it goes live. You just need to plug it into the right projector, and it will allow you to play the movie. We simply download the key from a desktop right onto a USB, and you can plug in the projector, and the movie goes live. Some movies have the keys available for a week and others available for a month, it really varies.

What do you do for entertainment before movies?

George: We’ve got a company called Screen Vision Media that sends us their screen visions (15-30 min), and we play that while the customers are sitting waiting for the movies. We open our doors only 30 minutes prior to the movie, and people often come in 10-15 minutes right before the movie, so there is not much dead time.

Smitty’s Cinema has four theatres right? What is unique about Tilton?

George: Diner! New Hampshire is a small state, and there is not much to do in this area. It’s a vacation spot, we’ve got beautiful lakes and mountains, it’s more of a state to explore, but as far as entertainment goes, there is not a lot going on.

How did you find Rockstar Bingo? Were you looking for a new entertainment night?

George: I actually wish that the director was on this. He’s the man behind the plan. He’s constantly looking to bring in business, especially when we’re slow and limited to what we’re allowed to do by movie companies like Disney. We are not allowed to show their movies without the rights, and we can’t show football games because of the size of our screens. I don’t know how he found Rockstar Bingo, but I’m glad he did.

How do you use the screen when you host Music Bingo?

George: Our marketing came up with slide shows, and we just use PowerPoint presentations. So, while Rockstar Bingo is going on, we can actually edit the slide. We have a Yacht Rock music slideshow, which is like a picture on the screen with a little box underneath it with the game code, and we also show the music bingo prizes. We also take screenshots of each game style, single line, double line x, and the game code box, and we pop them on the screen to let the customers know the game we’re playing.

If you could add any feature on Rockstar Bingo, what would you add?

George: I think it would be beneficial for the customers and the host if the songs are created in a way you could have a 20-30 seconds clip no matter what the song’s intro is. Some songs take more than 30 seconds before there is a lyric. This can help to keep it going quickly. It means the customers don’t have a chance to cheat or blurt out the answer.

Sean: You definitely can set your preferred start time for music bingo songs and save those as a setlist so that it’s done once and done forever for that setlist that exists now. End time is tough, and it has a lot to do with the Spotify API and how things work. We don’t have that much control over their engine.

George: That’s interesting to know. I did know that you can actually go in and change the start time of the songs. It’s something I’m going to be looking into for sure in the next music bingo game.

Sean: You’re on the Pro music bingo plan. If you go in there, there is a little tick box, and then there is a tab, and you can set your start times. So, if you grab the Yacht Rock music bingo playlist, you can then set your start times for the songs and save that game. In the future, all you do is open the game up, drag and drop your songs around randomized. You don’t have to always start with the same songs.

What kind of prizes do you give out to your music bingo winners?

George: I do it differently every week, so it’s not the same, but generally, there are five prizes announced before starting the event. The first prize is usually like two movie tickets or a free appetizer. The second prize might be the same thing, and then the third prize can be a gift bag. The fourth one we do a family four-pack, which is just four admission tickets. The grand prize is a $25 gift card to our theatre.

We also do some fun things too like playing two-line games to start the night. The first person who gets a single line will be called up for a hidden prize and two free sodas or popcorn. We give out quite a bit throughout the night, but the biggest thing for us is finding prizes that customers want to keep coming back for.

Do you have an anti-cheating stance for music bingo?

George: That was one of my issues with the whole event. Also another reason why I don’t want to play the song sometimes longer than 20 seconds because it gives players time to cheat. We didn’t have that issue until two weeks ago, when we ran our last event. We had a whole theatre row using the Shazam app. Every time the song popped up, players would blurt it out. It’s simply something that I’ll think about and come up with slogans or incorporate humorous slides to keep people off Shazam to retain the fun.

We wrapped up the podcast with George thanking us for the great work we’re doing at Rockstar Bingo. Smitty’s Cinema are doing an awesome job hosting music bingo in their theatres and it is really great to see entertainment industries expanding. Music bingo in theatres is a great way to entice new customers into your venue and give them a fun interactive bingo night!

You can listen to the full episode of The Music Bingo Podcast featuring Smitty’s Cinema here on Spotify or with video on our YouTube channel.